Experiences matter: A longitudinal study of individual-level sources of declining social trust in the United States

The US has experienced a substantial decline in social trust in recent decades. Surprisingly few studies analyze whether individual-level explanations can account for this decrease. We use three-wave panel data from the General Social Survey (2006–2014) to study the effects of four possible individual-level sources of changes in social trust: job loss, social ties, income, and confidence in political institutions. Findings from fixed-effects linear regression models suggest that all but social ties matter. We then use 1973–2018 GSS data to predict trust based on observed values for unemployment, confidence in institutions, and satisfaction with income, versus an alternative counterfactual scenario in which the values of those three predictors are held constant at their mean levels in the early 1970s. Predicted values from these two scenarios differ substantially, suggesting that decreasing confidence in institutions and increasing unemployment scarring may explain about half of the observed decline in US social trust.

1. Introduction
During the last several decades, the US experienced a worrisome decline in social trust (Clark, 2015; Clark and Eisenstein, 2013; Paxton, 1999; Putnam, 1995a, 1995b; Rahn and Transue, 1998; Uslaner, 2002; Wilkes, 2011). Data from the US General Social Survey (GSS) show that when asked in 1973 whether “most people can be trusted or you can't be too careful when dealing with others”, 46 per cent of respondents indicated that they could trust in most people. By 2018, this figure had decreased to 32 per cent. Though other countries, predominantly those classified as liberal welfare states, also underwent periodical decreases in social trust (Hall, 1999; Larsen, 2007), the sustained downward trend in the US stands out.

Social trust facilitates cooperation between strangers, thus reducing transaction costs in situations involving uncertainty (Rothstein and Stolle, 2008). This makes it a much-needed, if not essential, moral resource to resolve collective action problems and societal challenges. Many scholars thus consider the decline in social trust in America deeply alarming. To halt or to even reverse this trend, much depends on the hotly debated question of whether social trust is, like other expressions of ‘personal culture’ (Kiley and Vaisey, 2020), a moral stance that is socialized and learned during one's formative years (Bauer, 2015; Bergh and Öhrvall, 2018; Dawson, 2019; Uslaner, 2002), or whether social trust is an attitude that is susceptible to individual experiences throughout the life course (Freitag and Traunmüller, 2009; Glanville and Paxton, 2007; Paxton and Glanville, 2015). 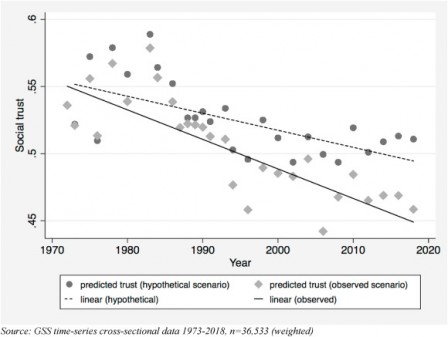