Nearly three-quarters of people worldwide solidly trust scientists: That’s one of the main findings of the Wellcome Global Monitor, a new survey that asked 140,000-plus people in more than 140 countries how they think and feel about health and science. Other polls have asked similar questions, but this one, conducted by Gallup World Poll on behalf of London-based biomedical charity the Wellcome Trust, claims to be the first to study on a global scale how attitudes vary by nationality, gender, income, and education.

An index based on five questions found that 54% of people trust scientists at a medium level and 18% at a high level, whereas 14% have a low level of trust. But regional differences are striking: People in Uzbekistan say they trust scientists the most, residents of Gabon the least. On the benefits of science, more than one-third of people in southern Africa and Latin America say science helps “very few” people in their country.

The survey also explored attitudes toward vaccines and found people in France are the most skeptical. The survey reveals a global gender gap in self-assessments of scientific knowledge: Globally, 49% of men say they know “some” or “a lot” about science—a full 11 percentage points more than women. 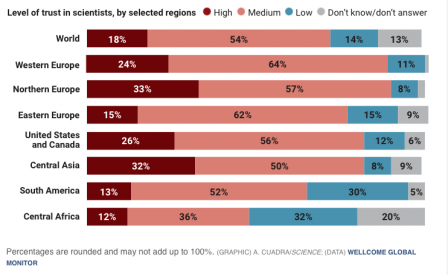