Structural Adjustment Problems and the Collapse of the Global Bond Market


Things work, until they don't.

An interesting observation has been made in the field of engineering, that when things are pushed too far, they tend to reach the limits their breaking point--until they finally break and collapse. It is the natural tendency of men to continue along a certain path until this path reaches its limits, simply because it is all too convenient to do so. However, given that engineering structures are social ones, their collapse can spell the demise of individuals.  Modern bridges that resonate with the wind, beginning to twist and turn until they collapse, or older iron bridges who continue design tendencies until they are untenable are some such examples. [1]

Another good example is that of the current shipping arrangements of the US industrial production system. As we all know, 'just in time' shipping--which appeared to be the most cost effective solution (god knows how many McKinsey economists justified it)--is now broken, and is creating one of the greatest inflationary pressure on goods and services that the US has seen in recent history.  However, it used to not be this way, as there were secondary warehouses all throughout the US that stored such goods in the US market system.  Their inefficiency was deemed uneconomical, forgetting or ignoring in the analysis how important their strategic function was.  And so warehouses, which would have prevented the current crisis from occurring, were eliminated. It seemed like a grand idea to eliminate inefficiencies from the system--until, of course, the system stopped working, as is occurring at this very moment. Again, things work, until they don't.[2]

The current structure of the global bond market appears to be another such example.

Puerto Rico's financial crisis has revealed how utterly irrational the global bond market is, and--in the long run--how likely a global economic collapse the likes of which we haven't seen could occur.

One has to ask oneself, now that bondholders are concerned that they could possibly lose enormous amounts of money, how was it that Puerto Rico could have continued to borrow money when its inability to pay had already been warned about in the 1980s? [3] As early as 2012, Cate Long had written an excellent piece for Reuters showing how the island would likely end up defaulting on its bonds. [4]

Its as mind boggling as it is absurd; as this figure increases, there is no 'leeway for failure', and will likely result in the toppling down of a vast number of global economies if one should go down. How this could have occurred is one the principal questions of this brief essay. 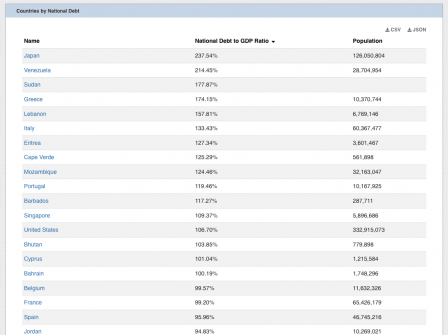 That the bond market system became so utterly irrational suggest that similar social dynamics as those described in the first two cases have been going on. Individuals become accustomed to things as they are, until the patterns set in motion by these arrangements reach their breaking point. The number of rationalizations for the system are enormous and, as John Mudd's tweets reveal, tend to rely on fringe philosophical ideas with little true philosophical merit--as those of Ayn Rand.  While 'capitalists' or 'bourgeois' (people with money) detest government intervention in to their affairs, they all too actively seek it out when their own interests become suddenly challenged, resulting in a fairly obvious contradiction between their public stance and their private actions.

If we look at the details of the Puerto Rico case, we can very clearly see how this irrationality has taken place--one that is obfuscated by some economists as those that have worked for McKinsey, as eloquently noted by Peter Hein during the PROMESA hearings on November 12, 2021.[6]  Economists working for McKinsey never bothered to verify the validity of the presumptions and figures which they were handed over by the Junta de Control Fiscal (also known as Junta de Supervision Fiscal). McKinsey, in short, charged $150 million to Puerto Rico to serve as a rubber stamp for the JCF, headed by Natalie Jaresco.

Similar dynamics have been going on in the public presentation of economic growth and statistics for Puerto Rico, and show the utter absurdity that the colonial situation has created for all of those involved.

National debt as a rule is measured on the basis of GDP, a nation's main productivity index. But, as the Bolivian economist Mario Tello and many others have noted, the presence of multinational pharmaceutical industry in Puerto Rico skews these figures, drastically elevating the GDP over and above the GNP (value of goods and services in an economy).  In other words, the wealth that is produced by the pharmaceutical industry is not adequately taxed by the local government--the pharmaceutical industry cried out when a miserly 4% was imposed on them in 2008 framework--and distorts as well the financial dynamics that occur therein.

One would suppose that economists would seek out the truth of the matter, but it is surprising how many do not. By and large, most websites which include Puerto Rico in its listings of global debt to GDP ratio have portrayed the Puerto Rican debt has hovering between 58 and 68% of GDP.[7] Yet, if this were the case, why is Puerto Rico having a financial crisis at the time?  It's debt is only a fraction (30%) of that of the highest debtor nation, Japan, so it is puzzling why there should be such a "crisis" to begin with--at least in theory.

The fact of the matter is that these figures do not exclude pharmaceutical productivity in the island, thus presenting a false picture of the true nature of its economic dynamics. To put it bluntly, it presents a rosy lie of Puerto Rico's wealth, not all too different from the false depictions of Donald Trumps wealth to German lenders while inversely painting a grim picture to the IRS.

Yet, as in Trump's case, the ability to borrow above one's financial capacity inevitably leads to a financial collapse, as the structural roadblocks which should have prevented this runaway lending from occurring had been removed. Trump has borrowed to establish a large number of companies that have been utter failures: casino, meat, airline, etc. Ironically, in a similar fashion the elimination of these roadblocks is not all too different from his removal of attorney generals from the federal government which were preventing political abuses of power from taking place. Just as there was financial fraud, there was political fraud precisely because these roadblocks--the unrestrained use of power by Ayn Rand--no longer existed.

It is fairly easy to understand the 'accounting tricks' which have been used in Puerto Rico's fraudulent corporate schema. If we eliminate the pharmaceutical industry's contribution to GDP to obtain a more accurate estimate of Puerto Rico's debt, we find that in fact the true debt accounts for 104% of Puerto Rico's GDP.[8]  This is roughly DOUBLE the earlier estimated PR national debt ratio of 58%, constituting a shocking margin of error in these calculations. If this were chemistry or physics, the student would have been flunked out of the class.

Note, however, that when placed in a comparative international framework, this debt level is not as 'bad' as that which has been being presented to the world. Again, note that this is more than HALF of the debt which Japan, the world's highest debtor, has accrued, and certainly far less than the dozens or so below it. (Note, again, that Puerto Rico's true debt is being falsely misrepresented in global figures, as they do not take into account the capital flow which occurs from the current tax arrangement).

One can then conclude that, in the long run, fuzzy accounting and hazy economics are bad for all of those involved. A true and obvious depiction of Puerto Rico's financial situation has not occurred, as it has been all to convenient for those with a financial interest in the arrangements to perpetuate. However,  similar dynamics are also occurring at the global bond market structure.

By failing to honestly confront the reality of this bond market--where countries have been borrowing far above their capacity to do so--a type of global Ponzi scheme has been created. The borrowing is continued again and again, to sustain the prior borrowing so that the system can sustain itself--until, of course, it will finally reach a breaking point and collapse under its own weight.

The issue with the US debt ceiling is a testament to this dynamic; why, after all, is it so catastrophic to remain within this debt limit? The  answer is fairly obvious.

1. Henry Petroski, To Engineer Is Human: The Role of Failure in Successful Design (New York: Vintage, 1992).

4. Cate Long "Puerto Rico is America’s Greece" Reuters, 2012, https://www.reuters.com/article/idUS190905039520120308.  There are problems with her excellent article which we will discuss later; specifically as its does not incorporate pharmacetucal productivity into her analysis.

6. These hearings have been transmitted via an ATT phone service, allowing all ot listen in.

8. This was based roughly on figures for 2019 established by BEA. Bureau of Economic Analysis, "Gross Domestic Product for Puerto Rico, 2019"  https://bit.ly/3nkCsIa.  These are napkin calculations and should not be considered final.